Beaconhills College open in 1982 in Pakenham with just 34 students and now has a thriving community of around 3000 students across two campuses.

The idea of a local, independent, Christian school came from a group of parishioners at St John’s Anglican Church, Upper Beaconsfield in 1980. By March 1981 a steering committee was formed, with John McConchie appointed as Chairman.

The College officially opened in 1982 with just 34 students and five staff. Frank Millett was the founding Principal until 1988. John McConchie remained as Chairman of the College Board until 1986.

As the local community grew, so did we! By 1988 the College had 388 students and 30 teachers, blossoming to more than 1000 students a decade later. Little Beacons Learning Centre was established in 2007, moving onto the Pakenham Campus in 2013.

2003 marked the realisation of our vision to become a multicampus College, with the opening of Beaconhills in Berwick. By then we had 190 staff and 1636 students across both campuses. As the College’s international program flourished, in 2019 a modern new boarding residence next to the Pakenham Campus opened. Beaconhills is currently the only school in the Casey/Cardinia region offering boarding.

In 2020 a second Little Beacons Learning Centre opened on the Berwick Campus, making both campuses Early Learning to Year 12. Today the College has around 3000 students.

Beaconhills has eight Houses named after patrons who played a significant role in the College’s history. The House system provides a strong structure for pastoral care, giving a sense of belonging and connection. And of course the spirit of House competition prevails in numerous events throughout the year, from swimming and athletics to debating, public speaking and performing arts festivals.

The College motto – Lux Luceat – meaning Let your light so shine was adopted when the College was formed, with the Latin version suggested by interim Principal Nigel Creese in 1989.

It’s an appropriate name for a school that has always endeavoured to be a beacon for its students and the wider community. Students have a broad range of opportunities to follow their interests – and help light the way for others.

In 1981, John McConchie presented his idea of a College logo in sketch form. It was developed into the official logo which was used until 2002, when the original concept of the beacon shining on a hill was kept, but modernised. 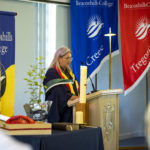 About us
Find out more